Is Anti-Virus Protection Necessary in 2021?

Between content streaming subscriptions, your monthly cable and internet bills, and keeping up with tech devices themselves, it seems like we pay an ever-increasing amount of money for our technology. On top of all of that is that pesky pop-up on your computer, reminding you that the free trial of your antivirus software is about to expire.

Snaking up from the bottom of your screen, it warns you your computer is at risk. The software wants to help keep your computer safe, but in return, you’ll need to pay for yet another subscription.

Maybe you’re wondering if you really need to heed its warning. Is your computer really at risk, or does the antivirus company just want your money? Can you get by without it?

If you partake in risky online behavior, such as viewing explicit content or downloading “sketchy” files, it’s especially a good idea to have anti-malware protection or antivirus software.

Those with bad intentions often hide malware and other insidious files in tempting free downloads. Even if the product is seemingly legitimate software that can be downloaded for free legally, it can harbor files that can steal your information or give your device a virus.

Is Malware and a Virus the Same Thing?

All viruses are malware, but not all malware are viruses. In other words, a virus is a type of malware. You’ll often see these terms used interchangeably.

Malware is a term that refers to any malicious software. A virus is a specific type of malware that can spread to other programs on your computer through its self-replicating code. Viruses are frustrating and dangerous because they can infect your entire computer, deleting files or inhibiting the function of your device.

However, you need to protect yourself from all kinds of malware in addition to viruses, like worms, ransomware, spyware, scareware, or fileless malware.

Where Am I Most Likely to Pick Up Malware?

Antivirus software or not, it’s always a good idea to steer clear of downloads from unsecured sources. If the file you’re downloading isn’t from the official source (like the company that makes the software or items within the file), you’d be better off not downloading it.

If you’re unsure about the file, sometimes you can do a quick Google search for “[name of the file you want to download from the site you want to download it from] malware.” You may find information on other websites from those who have already downloaded that file. You can also try entering it into VirusTotal.com, which will analyze the file and alert you if something seems off.

However, note that these two practices won’t cover you 100%, and by downloading a file from an untrusted source, you’re putting your computer and the information you have on that computer at risk.

After all, even big-brand websites we’d all classify as safe and trustworthy can fall victim to malware. Breakdowns in site security via the website’s ad networks can expose your device and information. While it’s rare, it does happen. So even if you stick to safe sites, there’s still a risk.

PCs running on Windows 10 have access to Microsoft Defender, a built-in antivirus software. This comes free of charge on your computer and provides security against viruses and other types of malware.

So do devices on Windows 10 need antivirus software in addition to this, or is Windows Defender enough?

While Windows Defender antivirus does offer a substantial amount of protection against malware, a PC relying on that alone won’t be nearly as safe as it would with a premium antivirus program. So while you can just rely on the built-in security in your PC, you’re still at risk.

It will all come down to your tolerance for risk and your willingness to spend some extra money on premium security for your laptop or desktop.

Macs have always been touted for their safety and security compared to PCs. This was in part because they had great security features built-in. It was furthered by the fact that fewer people used Macs, thus cybercriminals had less of an incentive to create viruses and malware for Macs.

However, the gap between the amount of Mac owners and PC owners is decreasing, meaning it’s becoming more and more profitable for cybercriminals to develop Mac malware.

So even if you have a Mac, it’s still a good idea to install antivirus protection on your computer. Like with Windows Defender, your Mac’s antivirus software is good, but it isn’t as good as premium malware protection.

Here are 8 other tips to stay safe online.

The Case Against Antivirus Software

First off, we’re in favor of antivirus software, because we think keeping your computer and the information on it secure is one of the most important things when it comes to internet-connected devices.

However, some opt not to use antivirus software or malware protection for a few, somewhat invalid, reasons.

The first of these reasons is that some antivirus software can potentially slow your computer down or overwhelm you with annoying pop-ups. However, this is mostly only the case with free security programs.

Take some time to read reviews for the different options to get a feel for the programs before committing. The good news is that with free software, you won’t be losing out on anything if you decide it isn’t working out.

Those who are anti-antivirus trust in their intuition to keep their computers and the information on their computers safe. They believe they can spot, and therefore avoid, any malicious links or files, depriving them of the chance to infect their computer. However, this can be risky even for the most tech-savvy among us.

Concerns of antivirus software limiting speed or exposing your computer to malware just don’t measure up against the need to protect your device and your information from cybercriminals. Next Post: 5 Steps for a Smooth Transition to Fixed Wireless Internet 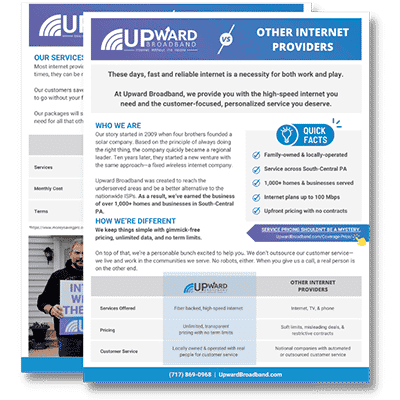